I don't know where the time has been going this summer! I have been intending to post about Teen Learning 2.0, the CSLA tutorial my friend Sheryl Grabow-Weiss and I completed last month as a teen introduction to the world of Web 2.0 tools: 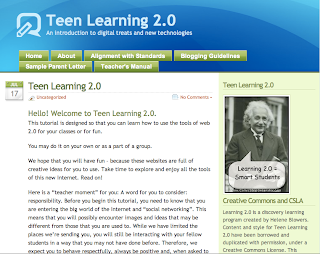 It's an updated version of Middle School Learning 2.0 developed a while back by Connie Williams as a student version of CSLA's School Library Learning 2.0 and Classroom Learning 2.0 tutorials. (Check this link for information about all the CSLA tutorials developed by the CSLA 2.0 team under the able leadership of Jackie Siminitus and Connie Williams.) Sheryl and I volunteered to rework the tutorial after "test driving" it - and modifying as went along - with several hundred students during the 2009-2010 school year.

The tutorial not only walks students through a variety of fun and useful Web 2.0 tools; it also emphasizes good digital citizenship. In addition, we included a teacher's guide, sample parent permission letter, and correlations with the draft of the California Model School Library Standards.

You can use the tutorial in a variety of ways:


There are probably other ideas I haven't thought of. Please share them and feel free to give us feedback!
Thanks so much to Jackie Siminitus and Connie Williams for giving Sheryl and me the opportunity to work on this. Thanks also to Sue Waters for offering a free Pro account of Edublogs.org, the platform on which we built the tutorial.