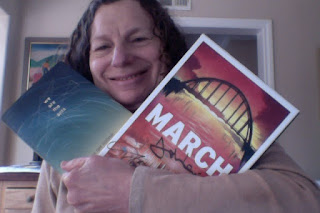 I became a librarian, and later a school librarian, in good part because I love to read. I have never, though, really tried to be a book reviewer. For one thing, I am a book lover, but, alas, not a fast reader. I only get through as many books as I do because I listen to a lot of audiobooks while I am driving or walking, along with reading print and ebooks as much as I can. For another, I have always felt that, after years as an English major analyzing books, one of my “rewards” as a librarian has been getting to simply enjoy and promote books, rather than analyzing, or, as I sometimes had to do as an English student, over analyzing them.

As I reflect back on the last year, though, I read and listened to so many books I loved, and I decided I would like to share several of the highlights. Most are books that came out this year, and several are, I believe, likely picks for the Printz Award, but the last three are older. I am a big fan of YA, so most of them were YA, but the couple of adult books I include at the end - both read before my summer trip to Scandinavia - would be appropriate for high school students. The rest are in no particular order. I took the liberty of borrowing the cover images from Goodreads, and have linked those images to Goodreads for more information about each title. 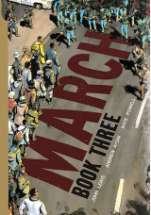 March, Books 1, 2, and 3 by by John Lewis and Andrew Aydin, Nate Powell (Illustrator)
John Lewis is both a current Congressman from Georgia and an icon of the Civil Rights Movement. This three-part graphic novel provides a powerful and engaging account of the Movement as well as John Lewis's important personal role in it. I was honored to get to hear Lewis and Aydin speak at the annual School Library Journal Leadership Summit in Washington, D.C. in October, and to receive the set. I had the first two books at the Mira Costa HS Library, but hadn't gotten to reading them. Frankly, I am not a big graphic novel reader. But, after hearing them speak, I had to read the books. They offer a compelling view of the reasoning behind the Civil Rights demonstrations, the sacrifices the participants made, and what they achieved. I'd like to see every middle school, high school, and public library stock these books and motivate today's students to appreciate the power of standing up for what is right. 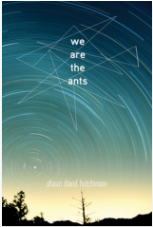 We Are the Ants by Shaun David Hutchinson
I was also very fortunate to hear Shaun David Hutchinson speak at the School Library Journal Summit and to receive a copy of this book. I couldn't wait to read it after I heard him. It is definitely not easy reading. Rather, it is, as Hutchinson explained, the kind of book that he needed to read to help him not feel alone when he was young. Henry, the main character, is dealing with the challenges of being gay, bullying, depression, his boyfriend's suicide, his father's abandonment of his family, his grandmother's Alzheimer's, and more. On top of all that, he is repeatedly abducted by aliens who are forcing him to make a decision as to whether the world is worth saving from destruction. You can't read this book without rooting for Henry, and feeling empathy for his challenges. Librarians will definitely want to share it with students who will relate to Henry and come away feeling less alone in their own challenges. It’s also an important read to help anyone better understand contemporaries dealing with Henry’s issues.

Passion of Dolssa by Julie Berry
I actually listened to the audiobook of this twice, re-listening immediately after the first time through. I enjoyed it so much, and wanted to make sure I filled in the few gaps that inevitably come from listening to a book while driving. Julie Berry does a wonderful job of making us appreciate what it was like to live in 13th century Provence and experience the oppressive role the Church played in the name of hunting down and eradicating supposed heretics. I especially loved Batille, the main character, a peasant matchmaker, but all of the characters are unique, well-developed, and interesting. I also recommend the audiobook version: there are several narrators, all good, but Jayne Entwistle as Batille is incredible. 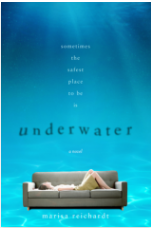 Underwater by Marisa Reichardt
Seventeen-year-old Morgan Grant used to swim every day and love hanging out with her circle of great friends. Now, she hasn't been able to leave her family's small apartment in months. Simple routines, like always sitting at the same end of the coach and having the same lunch everyday, are about all that helps her cope with her need for predicability. This need, we learn early in the story, came about after a tragic incident at her high school six months ago. We also learn that Morgan feels some personal responsibility for playing a role in the tragedy which she can't forgive herself for or even share with anyone. What Morgan does have going for her is her desire to get better. She also has the arrival of an attractive new male neighbor, her love for her family, and the understanding of her psychologist to help her work through her issues. Underwater is a very moving story told in an authentic voice of a teenaged girl attempting to cope with real pain and loss. It also has a great cover!

Salt to the Sea by Ruta Sepetys
Ruta Sepetys is a master of historical fiction, and has a gift for uncovering and filling her readers in on overlooked historical events. In this one, we learn about the sinking of the MV Wilhelm Gustloff, a German military transport ship, while evacuating both civilians and Nazi officials from the advancing Soviet Army in early 1945. This disaster caused by Soviet torpedoes represented the greatest loss of life of any shipwreck in history. Sepetys’s storyline begins as four young refugees form an unlikely group on their way to the Baltic coast in hopes of an escape to safety, and ultimately end up on the evacuation ship together. Each has a secret and interesting story. 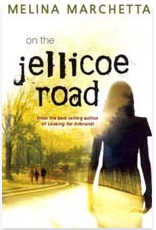 On the Jellicoe Road by Marlena Marchetta
I also listened to this one and loved Rebecca Macauley as the narrator, and the background music added beautifully to the lyrical quality of the narration. I meant to read this when it won the Printz Award in 2009, and finally got to it thanks to Sync Audio’s wonderful free summer audiobook program. Taylor, the main character and narrator, is about to be a senior boarder at the Jellicoe School in a small town inland from Sydney, Australia. She has been at the school for six years, ever since her mother abandoned her in a 7/11 store on the Jellicoe Road and Hannah picked her up. Hannah never explained why she was there on that day. Taylor desperately wants to figure out her past. As a reader, you will begin to connect the dots to her shared history with Hannah much faster than she does, but that doesn’t detract from the poignancy of her quest or the catharsis of her finally coming to terms with it. Don’t miss this one! 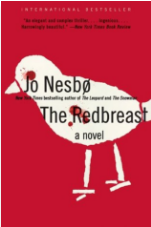 The Redbreast (Harry Hole, #3) by Jo Nesbø
I loved the suspense and complex plot twists of this Norwegian crime mystery, and it wasn’t a problem picking up Harry Hole, unconventional Oslo police detective, in Book 3 without having read the first two. (This was the first Harry Hole book translated into English.) The book is set in two alternating time frames: World War II and contemporary Norway. I learned a lot about Norway during World War II, and the role of both those who who participated in the Resistance and those who fought with the Nazis. It was a perfect read to give some context to my trip to Norway during the summer, but it should appeal to anyone who enjoys a good mystery with well-crafted characters.

The Almost Nearly Perfect People: Behind the Myth of the Scandinavian Utopia by Michael Booth
Michael Booth is an English journalist living in Denmark. His tongue-in-cheek assessment of the five Nordic nations (Denmark, Norway, Sweden, Finland, and Iceland) is both informative and non-stop entertaining. It is definitely a “must read” for anyone visiting any of these countries and gives you a good sense of their social systems and national characters. It definitely helped to prepare me for my visit last summer to Sweden, Denmark, and Norway, and made me wish I could also visit Finland and Iceland.

Posted by Jane Lofton at 3:08 PM No comments: 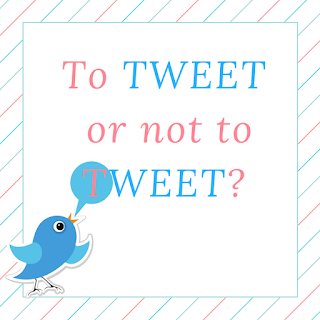 I have been a Twitter user and fan since 2007. I use it primarily as a key component of my personal learning network (PLN). I follow mostly people who tweet insights that can improve my work as a teacher librarian and school library advocate.  For several years now, I have even been doing presentations about Twitter and teaching mini-courses on how to use it as part of a PLN.

I am well aware, though, that there are people who don’t see the value of Twitter.  In fact, I usually start my presentations and course introductions off by saying that a lot of people don’t get Twitter; they think it is used primarily by celebrities to share what they had for breakfast. And, alas, with the recent election and aftermath, we are seeing it more and more as a vehicle for rants and even fake news. Anyone who isn’t already a keen Twitter user has quite likely been put off the idea that it has any value at all.

Just the other day, I found myself wondering if, with all this misinformation and anger clogging the Twitter feed, I should still be promoting it as a valuable tool. Well, after some pondering, I concluded that yes, I should. I reminded myself of the advice I have always given new Tweeters: Twitter is all about how you use it. Let’s not let a tool that has value for keeping educators be better informed and helping students be co-opted by people using it to spread negativity.

“Evaluating Information: the Cornerstone of Civic OnlineReasoning,” a study just issued by the Stanford History Research Education Group, found that 6-12 and college students’ ability to judge the credibility of online information was disturbingly poor.  We clearly need to be teaching students these skills. If you are a teacher librarian or classroom teacher, also consider including Twitter in these lessons. You can share sample tweets with your students and have them determine the source and whether, in the case of celebrity accounts, the tweeter account is verified; whether the source has credentials to be trusted for information shared; and whether facts shared can be triangulated (i.e., are they in sync with other sources). The Stanford study shares tasks that can be used with students and both as formative assessments and the basis for lessons on all forms of social media, including Twitter.

If you aren’t on Twitter yet, or you haven’t been taking advantage of it to enrich your personal learning network, don't let the negative stuff you hear about keep you away. And, consider attending my concurrent session on Twitter at the CSLA Conference February 3, or my four-week Twitter class for AASL member starting March 6. 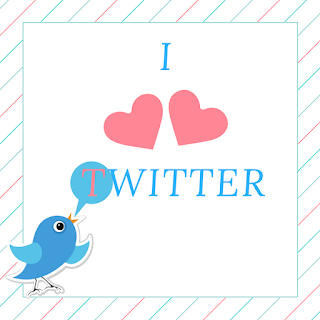