"The Jabberwocky" Successes and Failures

I really created this blog to chronicles my "adventures," successes, and challenges as a teacher-librarian who suddenly found herself in the classroom this school year. It seems, though, that I am always so overwhelmed with prepping and grading, that I don't get to chronicling. So today, before I get going on grading, I'm determined to write a little about my class's recent activities.

With the dreaded STAR tests looming in just over a week, I have felt obliged to do some review and to try to fill in at least a few of the items on the standards that I haven't had time to address directly in class. One big item I wanted to review was parts of speech, since it's been clear that my students need more practice in that area. At the same time, I am behind on getting to work on poetry. So, somehow I got the idea that we could review parts of speech while studying poetry. To try this idea out, I picked Lewis Carroll's "The Jabberwocky."

While the poem is a tour de force of nonsense words, the part of speech of each word is clear from its context. Here's what I did over several days to study the poem:
Successes: I had a lot of fun, and my students made it clear that they did, too. I think they were pretty surprised to realize that they really could understand this nutty-sounding poem once they took the time to explore and work on deciphering it.

Failures: On Thursday, I wrote and gave what I thought was a very easy online Quia quiz on the poem. I was sure that I had covered every question in class. While some of the students did very well on it, there were a lot of low grades and complaints that the quiz was too hard. So, I'm left pondering what I could have done to reinforce the lesson points better.

In the meantime, enjoy the fun Muppets video of "The Jabberwocky" I played for the students when we finished the poem:

Posted by Jane, TL in the classroom at 11:55 AM No comments:

Everyday now, we hear more depressing news about cuts to education and school libraries. In the midst of it all, we need to remember to keep on advocating and keep being positive. 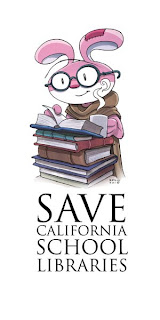 Here's a couple of positives I just heard today:


While I was at the Festival of Books yesterday, one stop I made was the Target Stage where I heard Jacky Davis and David Soman (husband & wife  author/illustrator team) read from their delightful new book Ladybug Girl at the Beach, and I was able to have them sign the book for me.  I was lucky to win a piece of artwork for the book signed by David Soman at CSLA Southern Section's Silent Auction at our workshop March 27, and I wanted to get a signed copy of the book to go with the art. Here they are on the stage with a life-sized Ladybug Girl :) 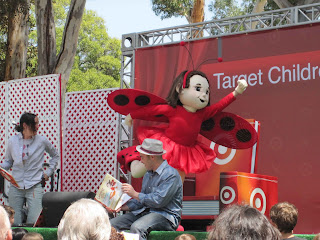 Posted by Jane, TL in the classroom at 9:52 AM No comments:

Circulate This! Stories from the School Library 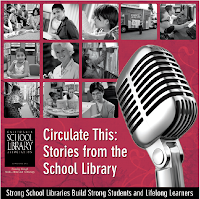 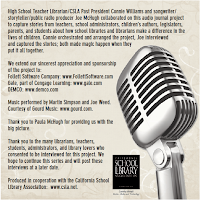 I am guessing that if you are reading this blog you already know about CSLA's wonderful new audio magazine, "Circulate This! Stories from the School Library." But, just in case you haven't discovered it yet, I want to make sure you do! Please make your way directly to this CSLA website link, and get ready for 45 minutes of wonderful stories about why we so desperately need school libraries for our children.

The project came about through the collaborative efforts of Connie Williams, Teacher Librarian and CSLA Past President, and Joe McHugh, songwriter/storyteller/public radio producer. They recorded stories from teachers, school administrators, children's authors, legislators, parents, and students, all sharing about the impact of school libraries on students' lives. The images I reproduced above were created as CD covers courtesy of Paula McHugh.

After you listen, please also pass on the great recording and these stories far and wide!

Posted by Jane, TL in the classroom at 10:57 PM No comments:

We had a wonderful day on March 27 at the annual CSLA Southern Section Workshop at Palms Middle School in Los Angeles. Dr. Stephen Krashen, one of the library world's very best advocates, was both an inspiring and highly entertaining keynote speaker. Our concurrent sessions were also great, as were our wonderful vendor exhibits, raffle baskets, silent auction to support our library advocacy cause, and our first-ever Web 2.0 Tools Smackdown. We also conducted our first book drive for local students in need, and collected over 250 books! Thanks to all the presenters, board members who put on the event, our always-generous vendors, and our fabulous host TL, Caroline Gill. And, here's the photo I was shameless enough to grab of me with Dr. Krashen: Posted by Jane, TL in the classroom at 12:30 PM No comments: