I forgot when I did my posting last night to include this photo of the poster I created for my "orientation" demo. (Sorry the quality of the iPhone-captured photo came out rather fuzzy.) As part of my application process at Mira Costa High School, I was asked to do a 15-minute library orientation demo for a class of students. I did the demo in order to qualify for an interview. The demo took place in a classroom of summer school students, and there was no projector or Internet available. I could have brought my computer, but I was dubious that asking 30 students to hover around my Mac Air would work well. So, I went low tech with a high tech theme using this poster, which I asked two student volunteers to hold for me. Each of the icons you see on the "iPhone" represents a feature of the library program (technology, librarian, research, procedures, virtual library, books, and fun programs). I described each feature in "random" order, then had the students guess which "app" it was and what it would be called. They wrote their answers on an index card, and then I asked volunteers to share the answer. Once I confirmed each answer, I also elaborated a bit more on the feature. 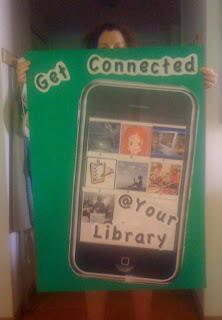 I also got some input on what students want from the library and what books they like. Before I started the features "game," I asked them to quickly write the following on their index cards:
"I wish the library would..." and "My favorite book is ..."
Many thanks to my great friend and super TL, Marie Slim (Marie's blog and Follow Marie on Twitter), for all her great input as I prepared for my demo.