If you've been following me lately, you will know that I am participating in the #EdublogsClub, sponsored by the amazing Edublogs blogging software organization. This week's prompt asks us to post a photo, with the reasoning behind that prompt, being to have us consider and respect issues of Copyright, Creative Commons, and Fair Use. I am actually doing two presentations that will explore these concepts and issues later this week at the California School Library Association Conference. So, I'm going to defer this discussion until next week, and I will post my presentation slides then. For this week, I'm going to share, instead, a little bit about my experiences and adventures last week attending the American Library Association Midwinter Conference in Atlanta.

The American Library Association is a huge organization, with multiple divisions. I belong to two of the divisions, the American Association of School Librarians (AASL) and The Young Adult Library Services Association (YALSA). ALA has an annual conference each year in June, and a somewhat smaller "Midwinter" conference each January. The primary participants at Midwinter are people involved on the ALA or division boards or committees. I went this year to attend a meeting of the planning committee for the next AASL Conference this coming November in Phoenix. I am serving on the committee as social media chair. Yeah, I know that sounds like a whole lot of conferences, but those of us who attend these events benefit from them in so many ways. We get amazing professional development, networking opportunities, chances to meet with book and other library product vendors, and so much more.

So, while my reason for flying to Atlanta was, theoretically, a two-hour planning meeting, it was actually a great opportunity to also attend wonderful sessions, catch up with old friends and colleagues, and make new connections. A big bonus of being at "Midwinter" is that this is when all the Youth Media Awards for children's and young adult books of the year are announced. You can see all of the awards on ALA website. I've watched the live stream of these announcements many times, but never been there in person before. The energy in the auditorium with attendees awaiting to learn the winners of the Newbery, Caldecott, Printz and other youth book awards was amazing.

The biggest excitement for me was that March, Book 3, the third in the graphic novel series by John Lewis and Andrew Aydin and illustrated by Nate Powell won four awards! I actually already wrote about getting to hear and meet Lewis in my October posting  about the School Library Journal Summit. I also included the book in my posting of personal favorites of 2016. The series relates Lewis's own experiences as one of the prominent leaders and heroes of the Civil Rights Movement. He traces events from 1964 to 1965, his role as chair of the  Student Nonviolent Coordinating Committee (SNCC), and the sacrifices so many people made to fight segregation. It won the YALSA Printz Award, recognizing the best book written for teens; the YALSA Nonfiction Award, for the best nonfiction book for teens; the Association for Library Service to Children's Sibert Award, for the most distinguished informational book for children and young adults; and the Coretta Scott King Award, recognizing the "outstanding African American authors and illustrators of books for children and young adults that demonstrate an appreciation of African American culture and universal human values." And, how especially fitting that the award was announced in Lewis's home congressional district in Atlanta, where he serves a U.S. Representative. Lewis is a true American hero, and I couldn't have been more excited to see his book win all these awards.

I also attended the YALSA Morris and Nonfiction Awards brunch following the announcements event, and got to hear Lewis and all the winners and finalists for these two awards speak. Here is my recording of Lewis's speech. Please forgive the poor visual quality of my impromptu recording; the important part is the audio:

The texts of all the speeches will be posted soon on the YALSA website.

Along with all the conference events, I also managed to get out and see a little bit of Atlanta. Here I am at the Jimmy Carter Presidential Museum and Library with two librarian friends, Jessica Gillis and Katie Williams: 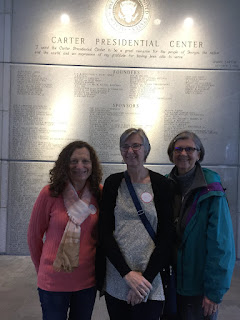 And here I am participating in the March for Social Justice and Women with friends:

Getting soaked but happy at the Atlanta #WomensMarch @shess220 #alamw17 love the huge turnout & so many #librarians pic.twitter.com/phb7NQ8Cs4
— janelofton (@jane_librarian) January 21, 2017


I feel so lucky to be a part of a profession of so many wonderful, dedicated librarians. They are an incredibly dedicated group, who all work to support students and make their lives better through their library programs. Here I am with several more of my awesome librarian friends, Sue Heraper, Joy Millam, and Heather Gruenthal: