My recent trip and other adventures 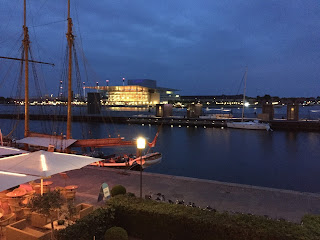 Yikes! I've now been officially "retired" for seven weeks. It sure doesn't seem like that much time could have passed! So ... what have I been up to?

Well, definitely my most significant activity was my husband's and my two-week trip to Sweden, Denmark, and Norway. It was an incredible experience, enjoying the rich culture, history, and people of each country; witnessing how these countries support high quality, free education, social welfare, and health care for all their people; and enjoying some of the world's most magnificent scenery. Since we were on a Stanford Travel/Study tour, we also benefited from great lectures and discussions with Professor Ed Steidle and we enjoyed making friends with the other three dozen members of our group.

A good chunk of the rest of these seven weeks has also involved the trip. I spent much of the two weeks after school was out getting ready for the trip. You know, deciding what to take, packing, and so on. Actually, I spent quite a lot more than two weeks, since I did a lot of both fiction and nonfiction reading over the last few months related to our destinations. The two books I think I enjoyed the most were The Almost Nearly Perfect People: Behind the Myth of the Scandinavian Utopia by Michael Booth, and The Redbreast by JoNesbø, translated by Dan Bartlett. In a very tongue-and-cheek style, Booth shares lots of insight into these countries and what is unique about their people. (It also made me want to go back and visit Iceland and Finland sometime soon!) Redbreast is a crime novel set partly in contemporary Oslo and partly during World War II, with the later focusing on the Norwegians who volunteered to fight with the Nazis against the Soviets and later tried as traitors. I was actually reading The Redbreast during the trip, and loved the coincidence of visiting the Akershus Fortress and its Norwegian World War II Resistance Museum on the same day that one of the book's characters goes to that same locale.

And, what about after the trip? We all know it takes longer to recover from a long trip than to take it, right? But I have also been occupied making a Shutterfly scrapbook. I felt a real sense of accomplishment when I completed it last week, curating from over 600 photos I took with my iPhone. I can't wait to get the printed copy in the mail next week. I appreciate how rich, enjoyable, and educational the trip was all the more after reliving it in scrapbook-making mode. Here is a small selection of the photos I added to a Google Photo Album. 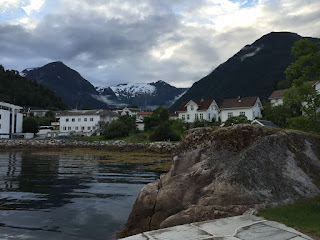 If you want to see the full scrapbook, send me an email.

And, finally, I've spent some time pondering my next steps: how I want to refocus this blog, what my new priorities will be with my new retirement adventure, and how to "rebrand" myself. Clearly, I need a bit more time for all this. With the summit coming up tomorrow, I did order new business cards, and decided, for now anyway, to go with Teacher Librarian now "in the wild" as my "title." I really don't think of myself as being retired; rather, I'm moving on to new ways of supporting school libraries, education, and educational technology. Here's what the cards look like: 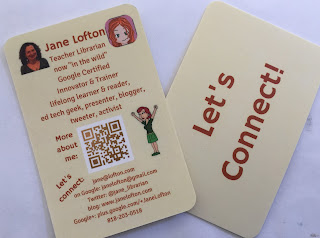 I guess I'll see over time if that new "title" works for me.

I also made what was for me, a big, probably very overdue, change. I finally let my beloved avatar go on my Twitter account, changing over to a photo. I set up my Twitter account in 2007, and I really, really love the manga avatar I chose to represent me. Back then, I was still a bit wary of having my photo online. And, I was working at the middle school level, and I wanted to model to my students how having an avatar is a fun way to have an online personality while still protecting their identities. And, to be honest, I love my avatar because her hair is a much brighter red than my own, her eyes always stay wide open, and she has no wrinkles. But ... I've been teaching a number of classes and leading sessions on Twitter recently, and I always give the advice that it is best to use a photo so that, when you meet members of your PLN in person, they will easily recognize you. At long last, I've decided to practice what I preach, and am now represented by a photo on Twitter:

As for the rest of my rebranding and refocusing, please bear with me as I take some time to work this "new adventure" all out.