The #SWVBC: Connecting Library Clubs Across the Country 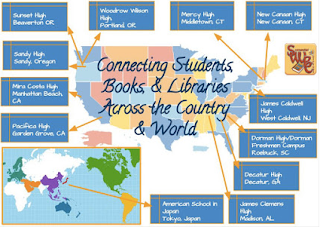 For five years now, my school library club at Mira Costa High School in Manhattan Beach, CA, and I have had the pleasure of participating in the “Somewhat Virtual Book Club” (#SWVBC) founded in Fall of 2011 by Joyce Valenza and Shannon Miller. Here’s a link to Joyce’s original post. So, what is the Somewhat Virtual Book Club? It’s a network of high school library clubs from around the country that participate in monthly book discussions using Google Hangouts on Air. For a while, we were even international with two schools in Japan, but, alas, the time differences proved too difficult from them to continue.

Each month, one of the schools volunteers to moderate, set up the hangout, and select the book to discuss. And, on occasion, we have been able to have the author of the book join us. Here, for example, is a recording of the amazing discussion with Elizabeth Wein in January when we read Code Name Verity:


Elizabeth Wein actually lives in Scotland, but was still willing to join us at 11 PM her time, and she couldn’t have been more generous, friendly, and open in discussing her craft as a writer.

The greatest feature of the club is how we are able to connect our students with other students in other places so they can both see what they have in common and learn about regional differences. It also means that, even if just a handful of students from one school show up, the presence of students from other schools together form a large enough group to generate a lively discussion. And, using Google Hangouts on Air, we are able to easily network in people from home and record our sessions so that those who can’t make the meeting can watch later.  At the same time, students are experiencing what it is like - with all the potential tech glitches - to participate in a virtual meeting. Finally, we librarians love it, too! Several of us have attended the meetings even when we didn’t have students able to participate. We’ve even had other teachers participate. I had an English teacher attend regularly last year, and Shoshannah Turgel’s group at James Caldwell High School in New Jersey has includes two regular teacher participants. We librarians also end up doing a lot of networking on all sorts of school library topics as a result of our meetings.

In the past, we have tried different software for our meeting platform. We settled on Google Hangouts a couple of years ago since it allows us to easily see each other while people are talking, and is a practical tool to introduce our students to with the possibility that they will use it on their own for other activities in which they want to connect. We wanted to empower them to be able to “run the show” themselves. I have been especially proud when I’ve been away at conferences a couple of times and my students still were able to get together and login to the hangout.

One of the potential drawbacks of Google Hangouts is that there are only 10 participation spots. (GAFE accounts allow for more, but haven’t worked for us since we are not in the same domain.) We have sometimes thought we would exceed the 10 available spots, but that has never actually happened. If we should, our “backup” plan is having the extra people watch via the live stream link and submit questions to the Q & A.

The club also has experimented with various social media. Here are some of our connections:


There’s always more to do than time in which to do it, and all these social media platforms could use some more attention. Perhaps next year!

The Somewhat Virtual Book Club welcomes new members. If you are a high school librarian, consider having your school join the group!


I write this with some nostalgia, since I will be retiring next month, and will thus become a group “alum.” I will really miss this network of students and librarians. Feel free, though to contact me with questions. You can also contact Shoshannah Turgel, who has volunteered to coordinate the group next year, and Michelle Luhtala from New Canaan High School in Connecticut, and Cathy Jo Nelson from Dorman High School in South Carolina, two regular participants who have been with the group since we began in 2011.